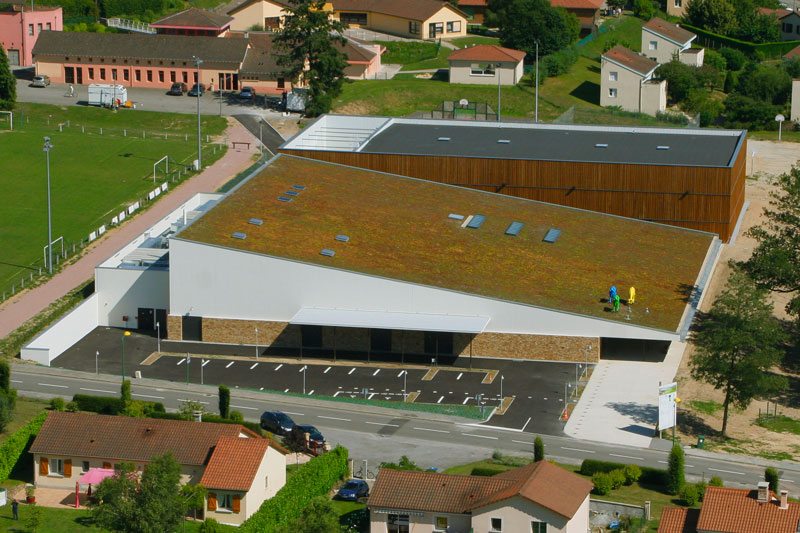 The premises were officially inaugurated for the 30th edition of the Salon International de la Caricature, du Dessin de Presse et d’Humour on October 1st, 2011. The group of buildings, made of concrete, wood and glass, hosts among other things two exhibition halls as well as documentary resources.

The Salon de la Caricature et du dessin de Presse de Saint-Just-le-Martel has kept growing ever since it was created in 1982. The most famous cartoonists of all nationalities join in. They tackle topical questions, from all angles, in all shades of grey, pastel and colours. For years however, the exhibitions were held under large tents but the organisers knew that the thousands of cartoons offered by the best cartoonists deserved better.

Gérard Vandenbroucke, president and founder of the Salon, as well as mayor of Saint-Just, had been working on a long term project for a long time. He often joked: « it took so long, in fact,  that  some of us  thought it would never come out ! »

But these efforts were not in vain and 2009 saw the beginning of the construction work.  Countdown had begun.

Throughout the years, Salon after Salon, numerous cartoonists have already donated their works. Many others have promised to contribute to the development of the permanent collections. Ever since the construction of the Centre Permanent in 2011, Saint-Just and also the Département de la Haute-Vienne, and the Région Nouvelle-Aquitaine have become the ultimate benchmark concerning caricature, press and humour cartoons.

It comprises a large exhibition hall, a nice conference and concert hall (with a stage, dressing room and backstage), as well as a reception hall, also used for exhibitions. Not to forget a number of workshops, offices and technical facilities…, and finally a bar and cooking facilities for social events.

This first building,  real « heart » of the Centre International, hosts the annual Salon but also, all year long, temporary exhibitions of the big names in cartooning, as well as conferences and seminars, shows and many other activities. It helps produce travelling exhibits, collect and preserve books and original drawings, many of which have already been donated to the Centre by cartoonists.

The second building, also called the gymnasium, can host different types of activities, thanks to a removable layer of protection placed over the floor. Normally used for sports activities, this large multi-purpose hall provides extra space for the Salon’s  exhibitions.

The overall cost of the project was 5,470,000 € including VAT (construction work, project management, equipment and furniture). All this was made possible thanks to the financial support of the Municipality, the European Union, the State, the Région, the Département, and the Caisse d’Allocations  Familiales de la Haute-Vienne.